The most remote section of the island and by far its least traveled by tourists visiting the island is the Puerto Rico mountains range that literally slices the country down the middle from west to east, and what separates also the north and south section. Many consider the middle of this island as the spiritual heart of the island.

The Cordillera Central Mountain range is the spine and backbone of the island providing vast and impressive peaks and valleys featuring winding roads through small mountain towns in an impressive 167 miles that can literally make you dizzy with all the turns. We imagine the allure of first coming to Puerto Rico when deciding to travel here is the beaches, Old San Juan, the beautiful people, the food, but the fact remains that the “real Puerto Rico” is right at the tops of mountain peaks that dissects the island.

Most travelers ignore this part of the island because it’s not necessarily the easiest to get to, and it does take some time and know how and much pre-planning to fully get the whole experience of this path down the middle.

The Cordillera Central mountain range features thousands of acres of undeveloped land in the heart of tropical jungle, the highest mountain peaks on the island with observation points, rivers, caves, waterfalls (the biggest one), local food and lodging stops, cave systems, forests, amazing natural parks, camping sites, and a panoramic route featuring many crazy twists and turns which makes this one of the most beautiful parts of the island. The rugged beauty of this range is what attracts the true adventure traveler with no agenda other than appreciating nature and the vast vistas while having nothing but time on your hands.

The Cordillera Central mountain is the “real Puerto Rico” in the sense that you can barely see any American influence or corporate stores along the way on this route. Here you can witness the genuine and authentic Puerto Rican people (jibaros), and be truly exposed to Taíno Indian culture. Because travelers don’t come to this part of the island as much as the other more popular areas, efforts have and are being made to attract visitors and bring much needed economic help to the small towns that make up the Cordillera Central.

What has been established is what is referred to as “La Ruta Panoramica” – or the Panoramic Route. The Panoramic Route of Puerto Rico faithfully covers the Cordillera Central mountain range from the west in the town of Maricao, and all the way to the south eastern shore in the town of Manuabo. However, you have to wait to reach “towns” for restaurants or gas stations along the way most of the time. In between towns is mostly driving through mountain roads with occasional scenic vistas (for the drivers its harder because they have to be so focused on the road) and some cool “off the beaten path” gems along the way (if you know where to look!). 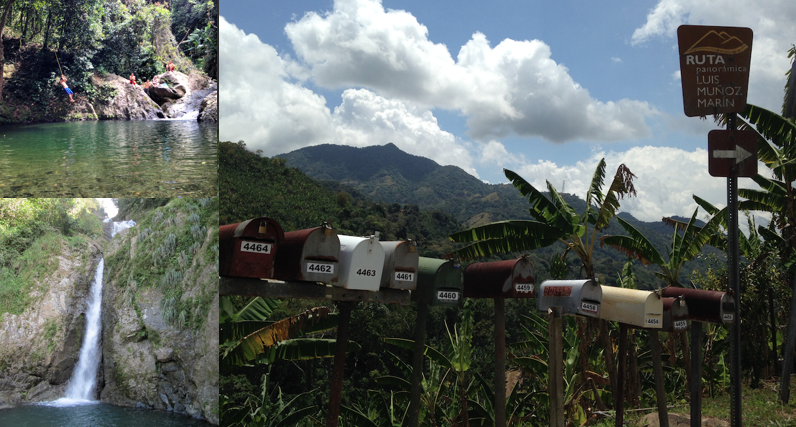 The Panoramic Route is a network consisting of over 40+ secondary back-roads that connect the east to the west, but La Ruta Panoramica is mostly along PR 105, PR-143, and PR-142. It can get a bit confusing and we will do our detailed best to give you the exact specifics of the Panoramic Route in the book! It’s important to note that you’ll need a good physical map to do this adventure as there are times you may not have cell phone signal.  See Google map directions below!

*The lanes are mostly 2 tight lanes and paved, however you will have some potholes you will need to look out for! There are many twists and turns and some very slow going at many points. We can’t emphasize this enough that while it is a beautiful drive, it’s long and you can get tired of all the twists and turns that make you feel somewhat dizzy after awhile. It’s a lot of driving, and some may feel bored after a few hours. But you’ve been warned.

Many drivers that are not familiar with the local roads have mentioned to us that they consider this pretty arduous driving with hairpin turns with “not that many scenic vistas” and poor signage.

While that is somewhat true, we feel that is part of the adventure and if you go into this trip with that mindset and knowing exactly when and where you are stopping “along the way” makes all the difference in the world! If you don’t plan beforehand though, this trip would be a nightmare and a total waste of time as you’ll be in the car driving pretty much the whole day. There are indeed many places to check out (revealed in book), you just got to know where they are and that they are not always along the official “Ruta Panoramica” so we’ll give you a suggested detailed itinerary soon.  This is a good head’s up and general information blog post.

First and foremost, it’s best to understand how many parts there are to the Cordillera Central and logistically what’s the best way to do this Panoramic Route and in how many days. There are 3 parts to the Cordillera Mountain range, with the main one running from Maricao out in the western side of the island, to Aibonito in the center of the island. The other two parts are a “fork” of this range, with one of the forks beginning in the town of Cayey and going towards Humacao in the eastern shore (known as the Sierra De Cayey). The other fork heads southeast into two lower ranges called Sierra Guarderraya and Cuchillas De Panduras into the town of Yabucoa and Manuabo (your end point).

The Panoramic Route / “La Ruta Panoramica” is best done if you have about 3 or 4 good days to do this adventurous journey completely and stopping along the way, and especially camping at night. Sure, it’s possible to do 1 day and do a part of the route, but for the purposes of this book we will give you the full itinerary and suggested stops along the way so you can make your decision how you want to spend your time. It’s best if you have the mindset of taking it slow and having patience. For those doing the Route and only want to spend one day, the logistics dictate that you start from the east and head west.

However, it is our opinion that the best way to do this Panoramic Route in 3/4 days is to head out west to Mayaguez (2 1/2 hours from San Juan), and then enter the Panoramic Route in the town of Maricao and head east for 167 miles towards the beautiful Punta Tuna Lighthouse in Manuabo. The in-between towns and parts are where the pre-planning takes place which will make or break this experience for you.  This trip is not for everyone!  Planning is key!

In this journey you will encounter over 20 small towns, the highest peak on the island (Cerro De Punta 4,390 feet), the biggest and tallest waterfall in the island (Canyon De San Cristobal), John the Baptist and Jesus (more on this later), fishes, camping sites and forests, lakes, towers, coffee plantations, museums, paradores (small country inns), the best adventure park in the island featuring death defying zip-lines and other goodies (Toro Verde Nature Adventure Park in Toro Verde Forest), Crystal Clear Blue ponds (Charco Azul), Taíno artifacts, amazing observatory towers where you can see the south and north ocean waters from the highest points of the island, and a lighthouse with a picturesque beach as your final destination. What else can you see? Well that’s up to you but there are options!

Not to always be positive, but on the negatives you will also will not be able to pull over and take pictures as often as you like as the roads are narrow in points, the pesky potholes, you could get lost, it may rain so much that you can’t see anything and will be under a constant gray cloud, you could actually be in a car for many hours. You may also run into some traffic at spots, especially on weekends when the locals hit the towns. It’s also much colder in the mountains than in other parts of the island – and it can easily be a 20 degree difference with very cool mists in the clouds so you have to be prepared.

However, all in all don’t let that scare you. The true traveler and adventure welcomes every single situation and makes the best of it. Which type of traveler are you? If this is your type of adventure, then wait for part 2 for details coming soon!  In the meantime check out the directions below and roads of the entire journey of the Puerto Rico mountains.

“Because in the end you won’t remember the time you spent working in the office or mowing your lawn.  Climb that goddamn mountain!” – Jack Kerouac