Quick Geography & Lay of the Island

The Metro Area is where you land on the Northeastern shore of Puerto Rico in an area called Isla Verde/Carolina. The Metro Area is the main hub and place you’re most likely to start and end your trip which encompasses Old San Juan, Condado, Santurce, Miramar, Ocean Park, and Isla Verde.

For the purposes of orientation for this book, the rest of the island is described as:

When To Get Here

You can basically visit Puerto Rico year round as the weather and climate typically offers Summer temparatures and numerous opportunities to enjoy the outdoors. There is a “high season” for tourism and a “low season.” The high season is between November-April (because most visitors come from the United States where the weather is cold during these months).

The low season and best times to avoid the crowds is between May-November. The pros and cons of coming during high season is the weather is a tad better and rains less, but the prices are higher. In terms of the low season, the cons is it usually occurs during “hurricane season” and you may run the risk of many afternoon thunderstorms, however it’s usually cheaper to travel the island during the low season. Average temparature in San Juan is 75 degrees in high season and 82 degrees in low season. In reality, you can visit Puerto Rico year round and have a great experience.

Emotional stress happens when you’re thinking “there” when all you have to do is realize we are here now. When to get here is not as important as to why you’re coming. But at this very moment, as you stare into a screen and read this and look up for a second – look around you, go ahead… perhaps even breathe in and out for a second and stop the onslaught of media information…

Let’s remember we always get there when the time is right for us. Whatever that means….to YOU. When To Get Here? Whenever you want! You’re kinda already here by reading this.

Getting Here:  Flying To Puerto Rico & Cruises By Sea

When flying to Puerto Rico, you will be booking airport code SJU (San Juan) and into Luis Muñoz Marin International Airport (787-791-4670) which as mentioned earlier is just west of San Juan in a region known as Isla Verde. It’s one of the busiest airports in the Caribbean, and serves as a main port of entry for most American and European flights. The airport itself is nice and small, and very easy to navigate. The signs are in english and spanish and you really can’t get lost here. The upstairs portion is for departures, and the downstairs is for arrivals. There are numerous taxis available (& car rental agencies) for transportation to your destination on the island. (see Getting Around section).

As a side note, there are other airports around the island of Puerto Rico such as the one in Ponce on the south shore, which accommodates flights from Atlanta, Newark, and New York in the U.S. as well as Aguagilla Airport on the West Shore which accepts some flights from the United States and Canada. However, the vast majority of flights come to Puerto Rico into San Juan and SJU.

The major airlines that fly into SJU are American Airlines, Delta, Spirit, and US Airways. Others include Air Canada, British Airways, Continental, Iberia, Jet Blue, Northwest, United, and Virgin Atlantic. See “Resources” below for tips on getting the best flight deal to SJU.

From Puerto Rico To: (By Air/By Sea)

Momondo is a great resource to check out flights in advance and usually has some good deals and includes random budget airlines. It’s pretty easy to navigate and is one of our favorites.

Orbitz is usually the first one I check out to get a general sense of the prices from a commercial point of view. Orbitz also offers the opportunity to book your hotel and rental car all at once.

Skyscanner is a newer airline resource and has an “everywhere” option and perfect when you want to find cheap deals.

The Points Guy is a great resource webpage to learn the tricks and tips on how to use your mileage points, and he seems to be ahead of the game in reporting travel deals first!

Travel Hacking. Chris Guillebeau is an author who has traveled the world and mastered also how to do “travel hacks” in order to save money around the world – especially with travel points. Check it out.

Flight Tonight App is a fantastic new app for smartphones/tablets that searches for the best flight deals that are leaving within a day or two. Even though the industry average for getting your optimum price for flights is typically 3 weeks prior to your departure, you can be surprised on some of the deals you can get last minute (or if you have an emergency and have to come to Puerto Rico or anywhere else at the last minute). This app is great for finding you your best deal at the last possible day.

Getting here by sea is also one of the ways many travelers experience Puerto Rico! Old San Juan is a major port city (in fact the name Puerto Rico means “Rich Port”) and is a popular cruise destination with over 1 million visitors annually. The following cruises include Old San Juan as a regular port of call: Carnival Cruises, Celebrity Cruises, Costa Cruises, Norwegian Cruise Line, Princess Cruises.

United States citizens only need to have some form of official government issued picture ID to enter Puerto Rico, such as a current driver’s license or a photo-identification state based and/or as social security card.. For additional information, contact your local U.S. embassy, or call the Puerto Rico State Department at (787) 722-2121.

Citizens coming other countries have the same requirements as if you were entering the USA. Potential visitors must first obtain a visa, either a non-immigrant visa for temporary stay or an immigrant visa for permanent residence. The 90-day “visitor” visa is a non-immigrant visa to enter the United States temporarily. Those planning to travel to Puerto Rico for a different purpose, such as study or temporary work, must apply for specialized visas (either an M-1 or F-1 class). A visa is not a guarantee of entry into Puerto Rico. The bearer of a visa is subject to inspection at the port of entry by U.S. Department of Homeland Security officials who have authority to deny admission (Homeland Security Advisor, La Fortaleza, P.O. Box 9020082, San Juan, PR 00902-0082 – 787-977-7730 / 7731).

At the airports in Puerto Rico, your luggage will be inspected by the U.S. Department of Agriculture to make sure you are not carrying prohibited fruits and plants to the mainland. Avocado, papaya, coconut and plantain can be taken to the U.S.; mango, sour sop, passion fruit and plants potted in soil cannot. Travelers carrying undeclared prohibited items will be fined on the spot. Articles from Vietnam, North Korea, Kampuchea or Cuba, illegal publications, lottery tickets, chocolate liqueurs or pre-Columbian artifacts may not be brought into the country.

Don’t worry though, passing through this is pretty quick and easy for the travelers and usually just involves passing your bags through a quick screener where they give you a sticker at the end that visually shows you passed.

Traveling can get very expensive, and if you don’t know some of the local tips and tricks in how to make your dollars last longer you will pay more than you have to in some places. As we’ve mentioned, anytime you are in the Metro Area of Old San Juan, Condado, or Isla Verde you are pretty much already paying more than 25% above what you would pay in the island if you weren’t in the Metro Area. Just know this is the “tourist trap” area in a sense, and get out a bit more and explore to save some money.

The other major money saving tip we can offer you is to sign up for the social media marketing website in Puerto Rico.

Gustazos is an excellent source to book hotels as much as 50% off as well as 50% off at excellent restaurants and tour excursions throughout the island. If you sign up weeks before your arrival in Puerto Rico, we’re positive you will get fantastic deals if you buy the “gustazo” and save tons of money. Check them out before you get here or during your stay and plan accordingly. 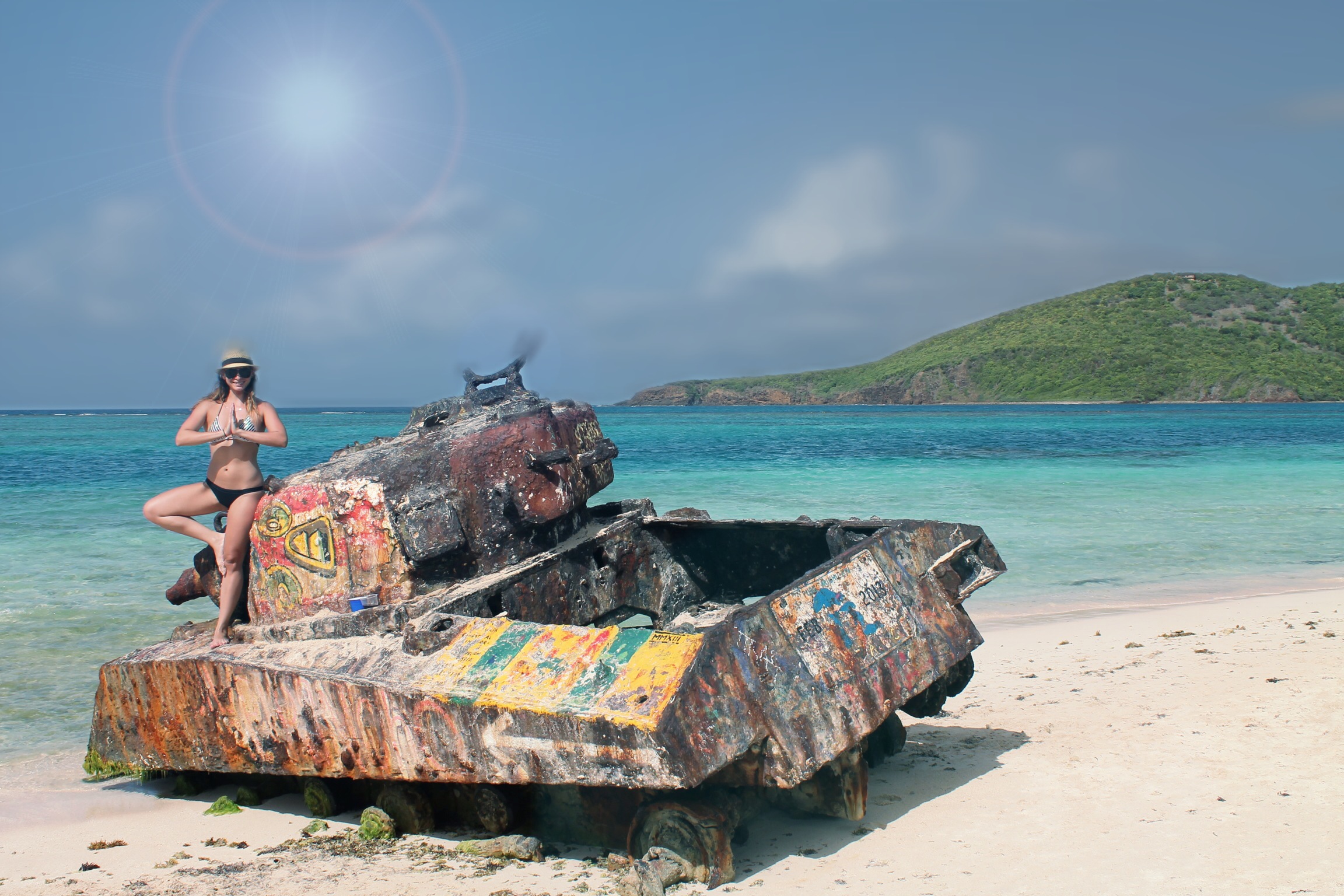 “I’m alive
I’m being born
I just arrived, I’m at the door”

Know where you are at all times on the island with our interactive links to the secret places we describe. Makes your life easier to take these road journeys, believe us!Learn more

The complete itinerary to see about as much of you can of this island in 5 days! Circle the island and see all of it for yourself and with those you love. Plus much more!Learn more

Jump into the unknown. Be a Traveler, not a Tourist. The island awaits…Learn more